(Hamburg, 05. July 2018) In June, the HWWI Commodity Price Index stood at 134.6 points (in euro: +127.8 points) and therefore fell by 1.2% compared to the previous month (in euro:-0.1%). The upward trend in the price development on the international commodity markets since March has been interrupted. An examination of the individual groups of raw materials shows that the sub-indexes for energy, industrial raw materials as well as food, drink and tobacco are decreasing. The index for energy resources fell by 1.1% (in euro: +0.1%), whereby the monthly average price of crude oil fell for the first time in three months. The index for industrial raw materials fell by -0.2% (in euro: +0.9%). The index for food, drink and tobacco fell the most. It fell by 5.9% (in euro: -4.9%). Therefore, the index without energy has also fallen. It fell by 2.2% (in euro: -1.1%) to 116.2 points (in euro: +110.5 points).

The average crude oil price of the three leading crude oil grades fell by 2.2% in June (in euro: -1.1%) to $ 72.28 (in euro: 61.89) per barrel. At the meeting of OPEC and other crude oil exporters, including Russia, in Vienna in June, it was decided to not increase the agreed total production rate from 2016, but to fully exploit it in the future. In the past, this rate was not fully exploited as some countries, such as Iran and Venezuela, were unable to maximize their country-specific production quotas due to technical problems, political crises and US sanctions. The only countries that were technical able to increase their output in the short term are Saudi Arabia, Kuwait, the United Arab Emirates and Russia. The volume of crude oil produced could rise by about 1 million barrels per day. In deatail, the average price of crude oil in the Middle East in June fell by 1.4% (in euro: -0.2%), the European crude oil Brent fell by 1.8% (in euro: -0.6%) and the price of West Texas Intermediate (WTI) crude fell by 1.4% (in euro: -0.2%).

In contrast, prices for coal and natural gas have risen again. On average, coal increased by 8.2% (in euro: +9.4%).The high demand, especially from Asia, for Australian thermal coal continues unabated. In Australia, supply is limited by a lack of investment in the development of new mines and infrastructure and depletion of existing mines. On average, natural gas rose by 3.8% (in euro: +5.0%), with a price increase for European natural gas by 2.4% (in euro: +3.5%) which is lower than the price increase for US gas by 5.3% (in euro: + 6.5%). Demand for US natural gas rose due to a heatwave in the middle and southeastern US. Overall, the index for energy resources fell by 1.1% (in euro: 0.1%) to 137.5 points (in euro: 130.6 points). 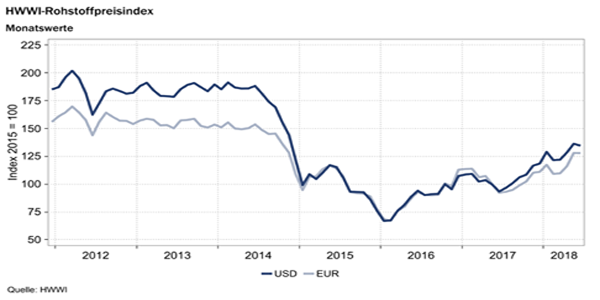 The index for agricultural commodities rose once again. These increased by 0.5% (in euro: +1,6%) in June, whereby the sharp increase in the price of sawn timber in the previous month weakening significantly. Sawn timber increased by 1.2% (in Euro: +2.3%). There was a significant increase in wool prices in June. The reason for this is an increased demand for clothing made from high-quality woolen fabrics in China’s middle class. Increasing demand is facing a limited supply, as sheep grazing capacity in Australia has fallen due to drought. The wool price rose by an average of 5.7% in June (in euro: 6.9%). The non-ferrous metals index remained with 0.1% (euro: + 1.3%) almost at the previous month’s level. The price developments of the individually listed non-ferrous metals in the index were different. The price of aluminum fell by 2.3% (in euro: -1.2%).The sanctions imposed by the US against the Russian aluminum producer Rusal initially raised the price of aluminum in the preceding months. Since end of May this year, the US has imposed tariffs on imports of steel and aluminum from Canada, Mexico and the EU. The price of aluminum initially rose at the beginning of June, but fell later in the month. Initial fears about a too scare global aluminum supply seem to be unfounded, as the imposed US tariffs could limit the demand for aluminum. The price of copper rose by 1.9% (in euro: +3.1%). So has the price of zinc. The price of zinc rose by 1.4% (in euro: +2.6%). Both non-ferrous metals had fallen in the previous month. Whereby the price for tin has dropped repeatedly. Tin decreased by 1.1% (in euro: +0.1%). Prices for lead and nickel have risen due to continued good demand once again. Lead increased by 3.2% (in euro: + 4.3%) and nickel by 5.1% (in euro: + 6.3%). The iron ore and scrap steel index fell by 1.6% (in euro: -0.5%).
Overall, the index for industrial commodities fell slightly by 0.2% (in euro: +0.9%) to 130.6 points (in Euro: 124.1 points).

The price of cocoa fell sharply, as expected crop failures could be lower than initially assumed. The average monthly price for cocoa fell by 9.1% (in euro: -8.0%). However, concerns over reports of lack of rainfall at the Ivory Coast pushed cocoa prices up again towards the end of the month. Coffee cheapened by 2.5% (in euro: -1.3%). In June, average prices fell for almost all commodities represented in the food, drink and tobacco index. Prices for corn, soybeans, soy meal and coconut oil decreased particularly strong. Good crop prospects in the US dropped the corn price. The corn price fell by 8.4% (in euro: -7.4%). In addition, China imposes punitive tariffs on the import of corn, soybeans and other US agricultural products. The Chinese punitive tariffs are the reaction to the introduction of US punitive tariffs on the import of Chinese products. Overall, the index for food, drink and tobacco fell to 95.6 points (in euro: 90.8 points).