In August, the price of natural gas rose on a monthly average of 4.2% (in euro: + 5.4%), after a decrease in July. The beginning of the heating season and a lack of storage capacity led to higher natural gas prices, with European natural gas rising by 3.6% (in euro: + 4.8%) and US natural gas by 4.8% (in euro: +6.1 %) , what makes it more expensive than in the previous month. The rising price trend for coal was interrupted. Expected increases in demand did not happen and the lack of willingness to invest in the development of new coal mines caused the decrease of the coal price. Coal became cheaper by an average of 1.5% in August (in euro: -0.4%). Overall, the index for energy commodities fell by 1.2% (in Euro: ± 0.0%) to 136.9 points (in euro: 131.5 points). 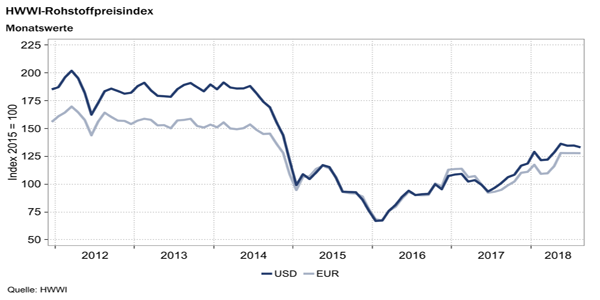 The index for agricultural raw materials fell by 5.8% (in euro: -4.7%), with the price of sawn timber falling in particular. The price of sawn wood fell by 18.2% (in euro: -17.2%). The non-ferrous metals index fell by 3.0 % (-1.8 % in euro terms), thus continuing the downward trend, although the extent was smaller than in the previous month. Price declines were again observed for all the non-ferrous metals listed in the index. Uncertainty about the unsteady US trade policy continues to burden the world trade. Because of that concerns about a worsening of global economy grow. The escalating tariff dispute with China, renegotiations of the North American Free Trade Agreement (NAFTA) with Mexico and Canada as well as the sanctions imposed on Russia, Iran and Turkey weighed on commodity prices. Added to this are the increased risks of the constantly devaluing currencies, such as the Russian rubles, the Brazilian real and the Turkish lira, and the resulting increase in volatility of international currency flows. The monthly average price of lead fell by 6.7% (in euros: -5.6%), the zinc price by 5.6% (in euros: -4.5%) and the copper price by 3.4% (in euros: -2.2%). Nickel and aluminum both fell in price by 2.5% (in euros: -1.3%). Tin recorded the lowest price decreade. The tin price fell by 2.2% (in euros: -1.0%). By contrast, the index for iron ore and steel scrap rose. It rose by 5.1% in August (in euros: +6.4%). Iron ore and steel scrap are essential components in steel production. The price increase could be attributable to continued good Chinese demand, as environmental regulations hamper steel production in China in the winter months and steel is therefore increasingly produced in the summer half of the year. Overall, the index for industrial raw materials fell by 1.6 % (in euros: -0.4 %) to 121.7 points (in euros: 117.0 points).

Food and stimulant prices fell again in August, although the downward movement was less than in July. While in July prices in the food markets were mainly affected by the effects of the trade conflict between the USA, China and Europe, in August reports of expected crop yields had the highest influence. Price increases were observed for all cereals included in the index, with wheat prices rising particularly sharply. Prices rose by 9.8 % (+11.1 % in euro). Reports of poor harvests in Europe and Russia drove the wheat price up particularly sharply in August. On the other hand, the average monthly prices of coffee and cocoa fell. The coffee price fell by 4.5 % (in euros: -3.4 %). Good harvest results in Brazil and a weakly developing Brazilian real are the causes of the falling coffee price. The monthly average cocoa price fell by 7.9 % (in euros: -6.8 %). The prospect of high yields for the harvest season beginning in two months caused the cocoa price to fall significantly in August. Ghana continues the plan to reduce subsidies for cocoa farmers. The price of sugar also fell in August. Good harvests and the increasingly devaluing currencies of Brazil, the world’s second-largest sugar producer, are reasons for this price decline. The average monthly price of sugar fell by 6.4 % (in euro: -5.3 %). Overall, the index for food and beverages fell by 1.4 % (in euro: -0.2 %) to 90.1 points (in euro: 86.5 points).