In November, the monthly average price for crude oil dropped in by 18.5% (in Euro: -17.7%) to 62.66 US dollars (Euro: 55.12) per barrel compared to the previous month. Thus, in November the price of crude oil was to 4.2% (in Euro: +7.6%) above the level a year ago. The announced U.S. sanctions against the Iran entered into force on 5 November. Crude oil prices fell in November, as OPEC and associated on-OPEC countries together with Russia (“OPEC+”) met the target rate and the United States of America provided crude oil at record levels despite the supply-restrictive U.S. sanctions. Economic expectations fell against the backdrop of the protectionist trade policies of the United States of America. Especially the conflict with China led to a significant decrease of crude oil prices in November. On 7 December, OPEC with Russia and the other countries together agreed to reduce the flow of crude oil from January 2019 to 1.2 million barrels per day. The supply could also be reduced by the withdrawal of Qatar from the OPEC. In November the prices of three in the index listed reference varieties developed as follows: the monthly average price of Dubai crude oil dropped by 17.9% (in Euro: -17.1%) compared to the previous month. The price of the European crude oil Brent fell by 17.9% (in Euro: -17.1%) and the price for the American crude of the type West Texas intermediate (WTI) de-creased by 18.5% (in Euro: -17.7%). 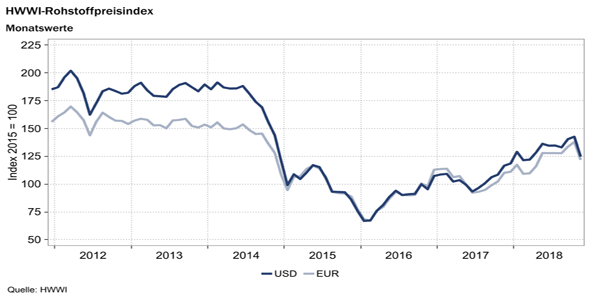