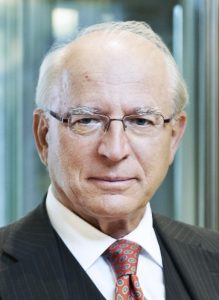 In an interview with Alexander Hornikel, associate at Kloepfel Consulting, Dr. Claus J. Raidl, president of Austria’s national bank, discusses the current state of affairs and the challenges for Europe. He moreover comments on the image of procurement.

What is your assessment of Europe’s current political and economic situation?

Europe is politically very unstable – not only because of current events, but in general. There is a lack of understanding for the fact that Europe can only work if the individual countries are prepared to hand over more power to Brussels. A monetary union can only work if there is also a political union, accompanied by a European finance minister who can act as a central body which determines the economic policies of the individual countries. We have the right tools, such as for example the European Semester, during which the individual governments present their budgets. But past experience shows us that a monetary union can only exist when accompanied by a political union. According to the measurement of key figures, the overall economic situation has improved. We can assume that there will be a period of economic growth, but the cooperation within the EU has some design flaws – as we saw with CETA. This is where we need more power in Brussels. It is unacceptable that a politician can block trade agreements the 28 member states are trying to ratify. So far we have survived every crisis, some crises have even helped us emerge stronger, but we need more leadership in the Commission.

Regarding the monetary union it is important to note that originally there were two theories concerning the establishment of the union: the locomotive and the coronation theory. The Germans, the Dutch and the Austrians supported the coronation theory, which means that a monetary union would only have been implemented when the individual national economies of the member states had approximated the monetary union. The other theory was the so-called locomotive theory. This is when you say “let’s make a monetary union” and the other countries that are economically not as strong as Germany, the Netherlands, Austria or also Finland will eventually adapt. Unfortunately, as we have seen, that did not happen. Instead, a rift appeared, which was always compensated for, in the interest of protecting the monetary union. Countries such as Ireland, Portugal and especially Greece were repeatedly supported financially. It’s worked out, but the European Union must re-evaluate, something that has become apparent with the farce around CETA‘s ratification process. The EU must change its decision-making process. After all, in America a single state cannot prevent a treaty from being signed.

You already mentioned CETA. Could you maybe briefly summarize CETA and state your opinion on the whole project?

In general, and especially for a small country like Austria, these trade agreements are very important. They are advantageous in the medium term as well as regularly being beneficial in the short term. Unfortunately, this whole debate about trade agreements has become part of a wave of anti-globalization – the criticism of globalization – which I believe to be wrong. This agreement with Canada is actually very well regulated, it’s not going to create problems like companies suing governments or anything like that. So I think the agreement is very good. But this procedure has shown, as I mentioned before, that there are problems with the way the EU is designed to conclude these agreements. There is always a debate about whether an agreement or treaty is a type of mixed contract, in which the individual countries have their individual say, or if it is an agreement that the EU can make on its own. But we need to settle this debate once and for all. Concerning the disclosure of information, it is certainly possible that the Commission also made mistakes. Although I remain cautious in that regard because when it comes to negotiating an agreement you can’t reveal every detail to the public. That is the point of negotiations, that they’re not conducted in public.

What are some of the key challenges to come out of the situation you just described?

Well, I think we should distinguish between economic and structural challenges. I think we need to concentrate on ensuring the successful outcome of this trade agreement and, in a more general sense, on creating more economic growth. And this is precisely where we need more investment – both in the private and in the public sector. The problem in the public sector is that we have debt limits for investments, so you need to make sure to save certain expenditures in order to make more investments in the future and to spend less on overcoming the past. What are expenditures needed to overcome the past? For example interest payments. We need to make sure that we can spend more on research, development, education, universities, etc. We need to achieve more growth through economic policy and the key is investment.

I already mentioned the structural challenges: the EU must create structures that ensure international tradability – even if this means through a change in contract. Because the result of all this, after this CETA disaster, is not only that we now have anti-EU forces gaining ground in all 28 countries – which was also due to insufficient leadership within the EU – but also that we can now no longer be taken seriously. We can no longer be taken seriously by our allies such as the US and Canada – although to a lesser degree – but also by Russia. Russia doesn’t want a strong EU – maybe the Americans don’t either – but up until now the EU has been considered an economic giant, but a dwarf when it comes to the military and foreign policy. And now we are running the risk of becoming a dwarf economically as well because we aren’t a unit capable of implementing economic policy measures together.

So when it comes to economic policy you think there needs to be more growth? For example, through investment?

Yes, both in the public and the private sector. Private investments need to be encouraged through tax relief, for example through investment premiums and similar measures. Public investments can be encouraged by shifting public spending more towards future-orientated expenditures and less towards past-orientated ones. Structurally, the EU should provide conditions that ensure tradability, that is important for our relations both externally and internally. Because this CETA problem has given anti-EU forces in all 28 countries an enormous boost.

Based on your experience, what can you say about the image of procurement?

Unfortunately, I get the impression that procurement within companies is often underestimated in both its importance and its weight. Despite the old saying that “every euro saved by purchasing goes towards the profit and loss account”, the possibilities for procurement are still underestimated. When strategically focusing on long-term procurement, it is important to distinguish between long-term contracts (such as a steel plant for scrap, coal or electricity) and less long-term contracts for operating supplies. But I am under the impression that the possibility of procurement as an internal profit or savings component is underestimated. Which is actually good news for Kloepfel seeing as there are still so many opportunities out there.