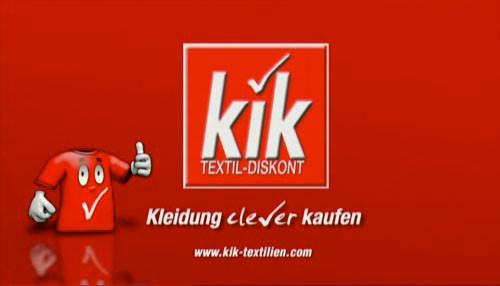 The textile discount Kik has surprisingly stopped its launch on the US market. The reason for that might be the trade policy of US President Donald Trump. “Because of the current difficult international environment and the threat of a trade war between America and China, but also between America and Europe, a start in the US is associated with too high a risk for us,” said Kik manager Patrick Zahn to the Handelsblatt. Ten Kik branches should originally be opened in the Midwest.

Now, the company wants to continue focusing on growth within Europe. “Instead, we will accelerate our planned further expansion in Europe” announced Zahn. The first stores in Romania shall be opened this year. Ten stores are planned for the beginning, and by the end of the year the number should increase to 20.

But much more important are the following steps. Between 2019 and 2020, the first branches shall be opened in Bulgaria and France. In particular, the French market is a focus challenge. Probably another reason for Kik’s decision against the United States. “The US market is already a big challenge in itself. We were always aware of that, “Zahn admits. However, under the current circumstances, the challenge seems too big. The impending tariffs would hit us hard and largely ruin our advantage in purchasing, “explains the Kik manager.

Last year, Zahn said with self-confidence: “If you make the decision dependent on who is president, then the decision was wrong.” In a re-examination of the plans, they came now to the decision to put the US project once back.

It can be assumed that the bad experiences of Lidl in America also contributed to the decision of Kik. Zahn has always labeled the American market as promising and has seen great potential for the project. The decision is therefore particularly hard for him: “I am very sorry for the temporary suspension, because I am still convinced that the concept of KiK would fit perfectly into the US market.”

Unlike other companies in the fashion industry, textile discounters have been growing rapidly since last year. The discounters NKD, Zeeman, Primark, Aldi and Lidl have seen sales growth of around five percent over the last five years and account for nine percent of total textile retail.

The Dutch company Zeemann is working on the expansion of its concept in Germany and Tedi is also growing. Established traders like Tchibo suffer a lot from this.

Even Takko-Fashion is back on the road to success after a weak phase. Last year, the company recorded sales growth of 1.3 percent, with sales of around 1.1 billion euros. Right now, Takko owns around 1,800 stores in 16 European countries and plans to open 100 new stores.

“I assume that the market for discount chains and off-price concepts will continue to grow in the coming years,” says Joachim Stumpf, Managing Director of BBE Handelsberatung in Munich. “A large part of the leases, which are currently being completed in shopping centers and other retail properties, are made by discount chains,” says Stumpf.

Whereas Zeemann announced that from now on they would like to open between ten and 20 new branches each year in Germany. And Primark is also planning new stores in Berlin, Bonn, Ingolstadt, Kiel, Munich and Stuttgart.

But there is also another, not so positive side of the development: Due to the high density of the German market, it is very difficult to find a suitable location. Kik has set itself the goal of opening around 350 more stores, but the competition also continues to expand and so it is increasingly difficult to acquire an available, suitable object.

Because of that, Kik manager Zahn has also put his focus on the growth of foreign business. The textile discount currently makes about one third of its sales outside of Germany. “Every year a new country” is the motto. The aim is to increase the number of European branches from 3,564 to 5,000.

Last year, Kik opened the first ten stores in Italy. This year they will be extended by 25 to 30 more stores. “We are very satisfied with the development in Italy,” says Zahn. The locations of the Italian branches are all very different in order to test the needs of the market. The tests have shown, for example, that branches in retail parks on arterial roads are particularly successful.

However, one thing has not been negotiable so far: Kik offers the same assortment in each country. Just the sizes can vary from country to country. But these high volumes in purchasing are the only way to offer the customer these enormous price advantages.

When starting in the USA, Kik would not have been able to continue this assortment policy. According to experts, the taste of Americans is very different from that of Europeans. Another point that would have made the business in America difficult and probably also led to the early withdrawal.